tonight was another one of those nights where we found ourselves saying ‘the weather is so nice, let’s sit on the patio and enjoy it while it last. it could be one of the last times we can this year, so let’s take advantage’.

the crew has been saying this for the past month and it hasn’t gotten cold enough yet for us to chose to sit inside the bar.

this summer’s sunsets has been the most memorable i can remember so far. there are a few factors for this though. 1)it may have been the first time i may have given it more thought than i’ve ever allowed 2)it may have been the colour i saw when i started following @pantone earlier this year on instagram 3)simply put it could’ve been because this was the first summer i actually got out and about within the city.

but let’s just face it – it was just the first time i’ve been single during summer. 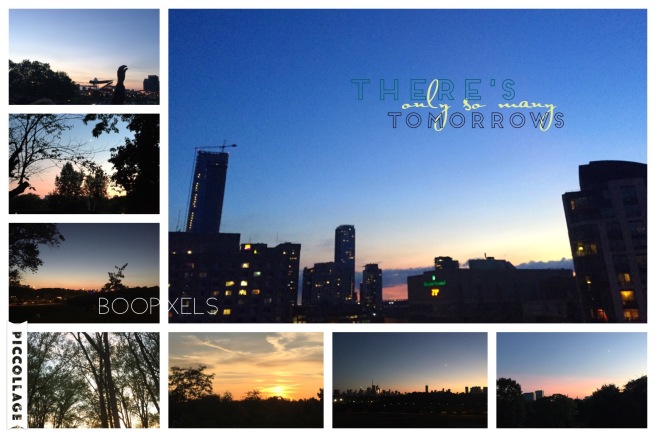 yes, in all technicality i am single but my heart hasn’t followed suit. i haven’t began looking/dating. there’s been a few instant crushes passing by that could turn into potentials, but that’s as far as it goes. i’m still that hopeless romantic, where i tell myself – i’ll definitely step up if i ever see him again. step up meaning ‘sharing a glance, then eventually building up the nerve to approach’. but in the city, it’s hardly unlikely.there was that one time that i came across a passing crush where i agreed (internally) to try talking to if i ever saw again but – i froze – stared at my phone and decided not to approach (or make eye contact) because insecurities. then my thoughts jumped to believing he’s crushing on my bestie. haha

but really, what’s the worst that could happen? he doesn’t remember ever running into me in the elevators. we share an awkward pause then i get off the subway wayyy before i am supposed to get off. dangit check out my ramblings… back to sunsets. do you see how beautiful they were. spent a lot of time looking up at the sky, falling deeply in love with the colours and thinking there’s only so many tomorrows.

the views from the 6ix was different this summer and i owe it all to the crew. perfect weather plays a part but when you are surrounded by people who enjoys the city as much as you have always felt everyone should, then it’s all just gravy. and everyone knows how much i love gravy!